We made it to the Sea of Galilee. I don’t think words can describe the all encompassing beauty of the place, so maybe this picture will suffice:

The Sea is astounding, inviting me into a reflective, solemn state every time I look at it. No wonder Jesus made this his home during his years of ministry.

To start, we traveled up to the coast. On our way, we stopped in the Judean desert, where the monastic tradition developed. Like the Sea of Galilee, the Judean desert was a vast expanse of hills, nearly silent as the wind blew threw the caverns. Here, we saw the beautiful St. George Monestary, tucked away in the hillside. Again, the site drew me into a reflective state, and luckily one of my friends got a snapshot of me gazing upon the vastness of it all. And to top it off, we visited the Jordan River, where Christ was baptized long long ago. 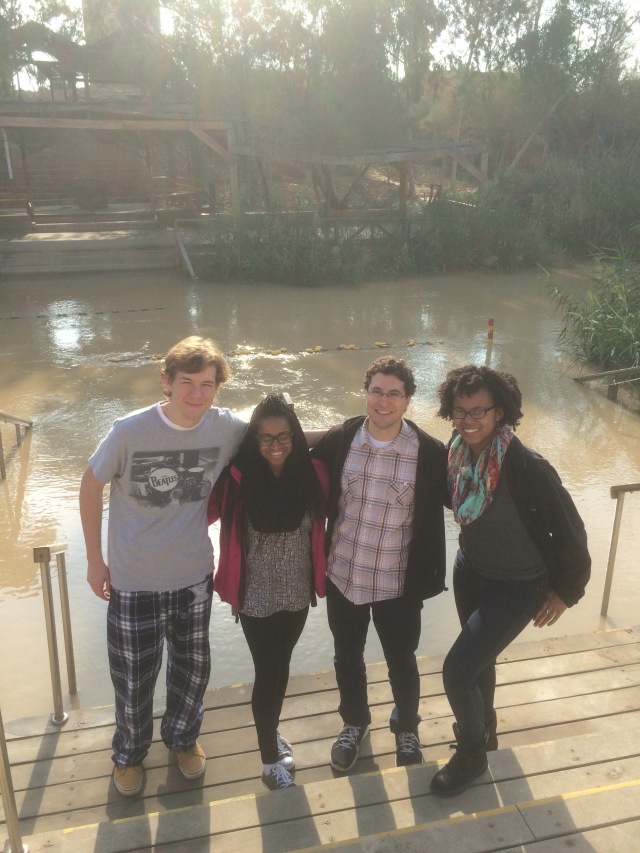 Next, we passed through a number of ruins, visiting old Roman and Byzantine sites. These sites let us peer into the past to see these ancient ways of life. The remains tell us a story of a Roman-Christian-Jewish mixture of cultures, where the faiths and traditions appropriated from and mingled with each other to create a fluid evolution of ideas. What we see are mosaics and synagogues and churches with various symbols both inside and outside of their particular faith tradition, borrowing elements from a number of seemingly conflicting sources.

Then, we made it to the Galilee. Here, about 3/4 of the Gospel events take place, and we passed through many of them in conjunction. We saw the Mount of the Beatitudes, the Church of the Feeding of the Five Thousand, Capernaum, Peter’s House, and of course, the sea itself. This tour of Christ’s ministry was moving and peaceful, as one could stand in awe of some of the biblical stories while turning one’s head to gaze out at the breathtaking sea.
This trip has brought the biblical stories alive. Although many of the sites are symbolic representations of actual events and are not the true locations of certain things, the spiritual milieu and aura around them reminds one of the power of the Scriptures.  Whatever the true facts are, at least this much is clear: for thousands of years, this part of the world has been inhabitated by people who have given us one of the most foundational texts in the Western canon. Christ lived here, working, preaching, and ministering while spreading a message of love and peace. Today, I sleep well alongside the shores of the Galilee, remembering that I’m walking where Christ once walked.